Significant Contributor
Very nice Overclocking is usually easy at least for the 1st 25%, need to be sure that VCore doesn't experience heavy voltage increase when CPU comes under load or activates 'Turbo' (if its enabled).

I assume you have run prime 95 and real temperature for a reasonable duration.

Also a lot of performance on load time(s), and such can be achieved by tweaking windows.
bann1​

Vuplus-Images Elite
The cpu comes at 3.5Ghz, unlocked and VCore is 1.3. I have run ROG's Real Bench for a couple of hours and also CPUID HW Monitor. All OK. Also run Valley Benchmark, for the overclocked gpu, and it failed. GPU back to stock, and got quite good scores. Using EVGA Precision and still trying, gentle increments on the gpu. Prime 95 didn't stress the cpu at all, and that is why I am using ROG's Real Bench. Windows next. The Corsair H80i, now I have the Pump USB connection, (missing in the box), and bought a replacement from PC Parts and Cables. still waiting of a delivery from Corsair USA. The Division plays a hell of a lot better now, #(still trying to get past Level 21 though)#, and several other games I have, have improved. Right going to tweak windows, too much going on in the backround.

Thanks for your input Banny.

ps: Now at level 30, (in The Division game), and getting better with 'The Dark Zone'
#-# At top level and the Underground is easy..;-))) sometimes. Must do more in the DZ for better upgrades though.

Latest mods to PC.
New case ...Nanoxia Deep Silence 2, bought from Quiet PC. btw, Corsair suggests to set radiator cooling fans to 'Intake' ?? I agree if the case has roof fans set to 'Extract'. Otherwise set radiator fans to 'Extract'. I can see the reasoning for 'Intake', (ambient temperature from outside of case cools the CPU better), but then the heat from the Radiator fans needs to be 'Exhausted'. My case has one pair of 120 'Intake' at the front, one 120 in the base set to 'Intake' and the radiator fans, (at present), set to 'Extract'. Works fine and very, very quiet on normal use. Running ROG's Real Bench or playing 'The Division' no real undue noisy fans. In the process of ordering a couple of roof fans. Pics to follow for whoever is interested.

Significant Contributor
Yeah get em posted... The only noise then is from the 120CM intakes and GPU fan which will only start making any kind of noise when under stress/load?

Significant Contributor
I play division too mate but on PS4, I like running 'Survival', would prefer it to be more random in terms of where things are, and that people couldn't 'steal' your loot from the NPCS. I wouldn't think the AIO CPU Coolers would need extra support from Air fans unless some serious overclocking had occurred? I know I put a similar cooler in a PC Build for a friend and we found they weren't needed.

Achieving an overclock of around 25 - 30 per cent is easily doable without getting too technical and without the need for any apps. I did look at a couple of the options but they didn't seem that popular with the hardcore over clockers. Would you rate the ASUS overclocking utility? Id of probably used the Intel Extreme Tuning Utility

Code:
Please, Log in or Register to view codes content!
only for the fact that its was Intel and they are the CPU Manufacturers.

Im guessing you are more informed now on Division, but if you want a second opinion or advice on something let me know.

Vuplus-Images Elite
Thanks for the info. Just after I posted, I played T.D. Underground, and lifted my earphones and listened for excessive whines or fans speeding up noises. No problems at all. For the time being going to leave the 2 extra fans. If you are ever in, online with division and come across Mich-1944 that is me. Now 30 in main game, 30 in dark zone and 37, I think in underground. Need more powerful weapons. Have a Vector 45 ACP. The more I play the more gear comes along and parts and tools. 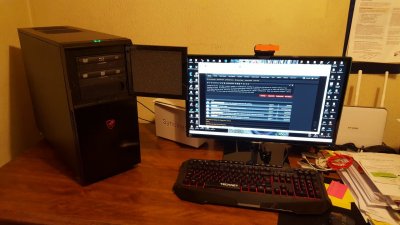 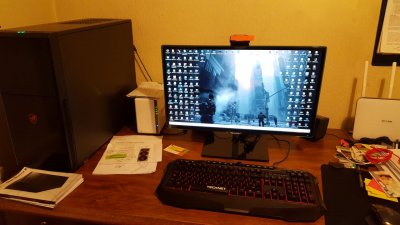 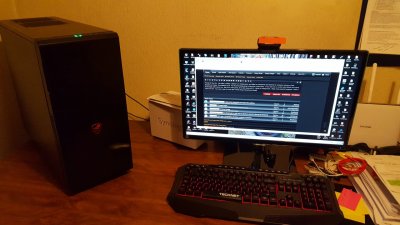 As promisied a couple of pics, (I hope), of PC and my/our new toy. 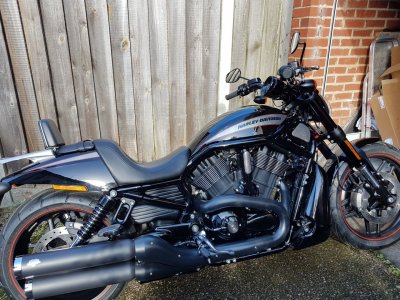 Significant Contributor
'Our toy' very generous of you. All Harleys or at least most look awesome, but me riding a Harley would end up with me being very mangled lol

The fans can't do any harm, usually people go for water cooled options to

I would like to do a full water cooled system, but other than the all in one sealed units like you have used, I just can't wrap my head around purposely putting water into an electrical system.

You can also get fan controllers that fit into the 5.25 inch bays, with digital outputs, so you know how the temperature of your PC is doing, again that comes down to reducing the noise really.


Your desktop is same as mine almost, there is a black and orange case that looks like the division colors. I found a good division screensaver too -
Code:
Please, Log in or Register to view codes content!
The named elites in the open world have fixed locations, change your world tier to 5 and kill them (they are on a 4 hour reset time from the time you kill them), hit a few missions and incursions (although like you probably do, I rely on match making and random groups). I struggle for space, also the blue print vendor sells different patterns every week you can buy with Phoenix Credits. I usually end up getting annoyed at the group of 4 thinking they are good having killed a lone player in the dark zone. If you are looking for people to group with or build advice the reddit page maybe of use to you
Code:
Please, Log in or Register to view codes content!
there are pages for 'clans' and group finding. I have no idea how far you are in terms of progression and building your character, so might be telling you things you already know lol

Unlike some games, division keeps players of same format separate.

Vuplus-Images Elite
Thanks for the info Banny, on division. A lot I didn't know,. I have joined a several groups for skirmishes, but I am a bit of a loner. I don't like to let my side down, ie; keep being revived. Done a few Daily and Weekly in the open world. Nearly through all the 'Easy Foray's in the underground. Next 'HARD'.
As for the Harley this will be the last one. Started out back in 99 with a Honda Shadow, HD look alike, then bought our first HD in 2002 and we haven't looked back since, (only before I/we overtake on an open road

Significant Contributor
Not many people play underground, it was popular at the time but before they fixed it was very glitchy and buggy and was impossible without a co-ordinated group. There is a lot to take in at first and it doesn't help that balancing changes are made every time that do an update so you have to change your gear and such accordingly.

I am sure you aren't that bad, although I get your point I am overly conscious of doing the same, but we everyone who plays has had to gear up and learn, something sadly online players but that is common to every MMO game, its a pity we are on different devices, most of time its just me and one of my friends, we group with randoms as needed but its a roll of the dice, loot drops everywhere so we could of easily got you plenty of items and explained which items work best together. Id recommend SkillUps youtube channel
Code:
Please, Log in or Register to view codes content!
Even if you cba watching the videos, most of his guides have links to reference pictures, as to what stats you best want to keep on items depending on which gearset and weapons you are using. You will spend a lot of time re calibrating and looking at your numbers, its a necessary evil of the game.

See how you get on now, and if you come across anything your unsure of, just let me know and ill answer if I can

Vuplus-Images Elite
Cheers Banny, had a look at a couple of vid's and changed my weapons. Now a lot more 'KILLING' Power. Got to get out into the real world, (in Division), and do some more Harder assignments.
You must log in or register to reply here.
Share:
Facebook Twitter Reddit Pinterest Tumblr WhatsApp Email Link
Top Bottom