This program is freeware exclusively for dealing with the Enigma2 based STB's via the network. The use, especially data transfer to and from the STB is at your own risk.

- Memory Info enhanced for 8 Mountpoints. dev,boot,tmp or var can be disabled to get more space for additional Mountpoints.

- Some smaller changes and bug-fixes.

- Adjustments of the modified recordings.epl
- some smaller Bugfixes

Staff member
Super Moderator
After a long time a new version, this time with profound changes ...
The current version is Beta! It contains extensions (eg support for * .deb packages) 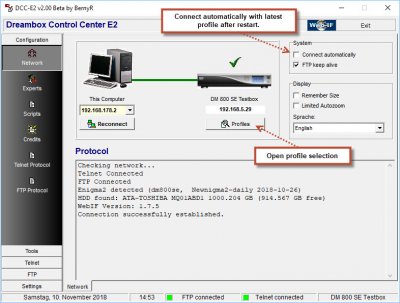 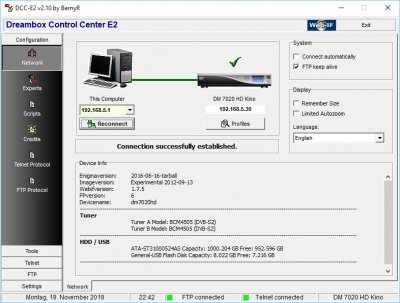 WebIF ports not equal to 80 did not work
Fixed, it should now work every port in WebIF Line shift

in device
info after window zoom Fixed, device info is no longer zoomed by default

Update * .deb packages did not work
Will be done now with "apt update" (only the list is updated, there is no update of the packages themselves!).
Can not test this because I have no box using the * .deb packages

Character
salad "[6n" in the Telnet protocol created by missing end-of-line identifier in the Telnet text buffer.
Only ugly, had no negative effects.
Fixed.

Delete from Recordings did not work
because of missing encoding of the sRef parameter in the WebIF post.
Fixed, deleting recordings should now work.

Downloading recordings with umlauts in the file name did not
work because of different character sets between the file system of the box and Windows.
Fixed.

FTP was still displayed as connected in case of error (eg missing password).
If no password was entered in the profile although at least FTP requires one,
then the connection was established, but the FTP component waited in the background for the password.
Now an appropriate message is issued and the connection is terminated.

Multi-Download / Upload now only in one window
Previously, a dialog with the forest step display was opened for each file to be copied.
Copying a lot of small files (eg picons), that was an annoying window on and off.
Now all files to be copied are displayed in a single dialog with file counter.

Added "Copy path" in the FTP Commander
On request of the user, this function was added to the context menu of the path display in the FTP Commander.
Beside "Remember directory" and "Root" now the set path can be copied to the clipboard.
https://www.bernyr.de/dcce2/bilder/dcce2_212_copy_path.jpg

Minor bug fixes
Mainly in the FTP environment.
For example, the refresh rate in the progress bar has been decreased for a smoother run.

If you havn't tried it Don't Knock
If it's not on this forum try google it!

HTTP Service Port
A further "service" port can now be defined in the profiles.
Thus, the website of an installed plug-in can be called with its own web interface (eg for streaming or various services).
The corresponding button in the header only appears if a port has been defined.
If this function is not required - simply set the port to "0" or leave it.
http://www.bernyr.de/dcce2/bilder/dcce2_230_service.jpg

Remember Last FTP Directory
Optionally, DCC-E2 can now remember the last set FTP directory of each box and set it again when reconnecting.
The last directory is stored in the respective profile of the box, so each box has its own last directory.

In the FTP text editor now also saving without quitting
So far there was only the possibility in the text editor "Save and quit ".
Now there is also a function to "save" without leaving the editor.
The file is written back in the background via FTP or stored locally.

New settings in the FTP text editor
A dialog for "Settings" has been added to the editor.
This allows further settings for the handling of tabs, line numbering and right marking line.

The default settings are shown in the screenshot above.
The previously fixed right marking line for 80 characters (gray line) can now optionally be switched on or off (default setting: Off).

Shortcuts in the Commander and text editor
In the Commander, all files in the directory can be marked with Ctrl + A.
The editor has now been extended with Windows usual shortcuts (eg Ctrl + S Save, Ctrl + F Find, Ctrl + Shift + F Find And Replace, Ctrl + C Copy, Ctrl + V Paste).

System Browser no longer with automatic authentication
If the option for HTTP login was activated and the default browser of the system was used, the browser call was made with http: // name: pass @ ip-der-box.
Since this procedure is not supported by Microsoft browsers (IE, Edge), the system browser is now generally called without authentication.
This does not apply when using the internal browser, which will continue to authenticate automatically.

Port configurable for FTP (experimental)
A port change currently works only for FTP.
The Telnet component supports only the standard
port .. A change of the FTP / Telnet ports is not recommended anyway, instead I recommend to use a VPN access for external access.

HTTP Service Port
A further "service" port can now be defined in the profiles.
Thus, the website of an installed plug-in can be called with its own web interface (eg for streaming or various services).
The corresponding button in the header only appears if a port has been defined.
If this function is not required - simply set the port to "0" or leave it.