Hi, when i watch movie from HDD with BLACK HOLE mediaplayer , player not show properly some characters. Exactly NOT show this characters :
Z,S,C and Č,?,?. This is Windows 1250 or ISO-8859-2, for represent texts in Central European and Eastern European languages, that use Latin script, such as Polish, Czech, Slovak, Hungarian, Slovene, Bosnian, Croatian, Serbian (Latin script). Any hepl ?

Not really sure as i never really use subtitles, you could try installing the DDamir subtitle player from the BH feeds & see if it handles them better. 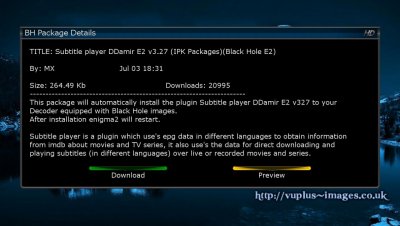 Thanks,but this plugin is only for DVB subtitles, not for .srt format

cakalov.p is right, when i open some movie with subtitle on movie player lettering like ? ? ? ć č ? ? are not showing, what we can do on this question

Does this problem exist with all images or just BH guys?

Missing font somewhere by the looks of things. Had a read on git hub where there was some discussion around having the latest Mediaplayer installed to fix this but when I looked for such I found nothing coz it would appear that the old mediaplayer has all but been abandoned now.

Have you tried playing movies directly from the movie browser (via the 'recorded movie' button on the remote)?

I also looked in my mediaplayer plugin folder but there is no font folder to add fonts to and also no idea which font is needed to fix this yet anyway.

Wonder if one of you could upload an SRT that has the problem for me to try on ATV to see if it also fails to display properly on my image. Then at least I can have a play with fonts to see if I can find a fix.

Please do NOT post comments or for support in download only sections as it defeats the object in having a support section at all.
Thanks posting is SPAM & liable to a BAN!
​

SuperTux said:
Does this problem exist with all images or just BH guys?
Click to expand...

This problem exist with all images

i find one solution. Download MKVToolNix and add srt to the movie ( harcoded srt ), that files will be converted in mkv ( matroska ), than all character will be visible

All it need is to put Central European and Cyrillic into the movie player and problem will be fix, how its possible this can help someone

I agree. This is really one for the dev teams to address because I tried changing every logical setting, adding every central/eastern european language, set my box to Polish, Croatian, etc, using every media playback plugin including, direct play, Mediaplayer, Mediacentre, TSMedia, movie browser. The box refused to show these special characters. This would indicate to me that it is something basic within E2 itself. So I do not think 'fixing' mediaplayer is the answer to this problem. Besides I do believe dev & support for it has now ceased anyway. I still think it is a font issue within E2 but which font and what to add/replace/install instead is the big question that hopefully someone from one of the main dev Teams like BH or ViX could possibly answer.

Worked fine for me in VLC BTW. :lol1: 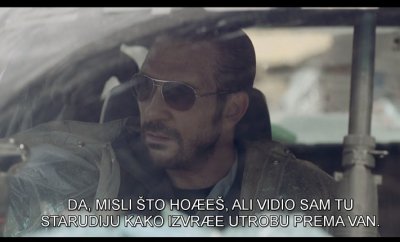 Thanks for your help M8, needed this, VLC need Eastern European (Windows-1250) to read this srt subtitle like on pictures