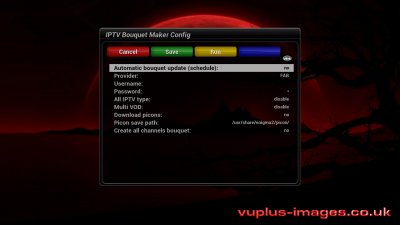 v0.6
Plugin (beta)
We’ve now released a plugin for the script. As it’s still in beta please only use if you are comfortable knowing it’s only had limited testing and know how to re-flash your box if you encounter any issues.
Update: Not had any negative reports so should be safe to use

Potential Issues
Custom sorting – If you have an override.xml file then when the bouquet update is happening you may see the spinner graphic and the box ui may be unresponsive for around a minute

Downloading Picons (especially on first run) takes a long time. Your box will show the spinner graphic and the ui will be unresponsive while this happening.

v0.6.1
Script changes
Plugin changes
Notes
The delimiter command arguments have been removed (-d1, -d2, -d3, -d4). Due to improvement in the m3u parsing these are no longer needed

Plugin Potential Issues
Custom sorting – If you have an override.xml file then when the bouquet update is happening you may see the spinner graphic and the box ui may be unresponsive for around a minute

Downloading Picons (especially on first run) takes a long time. Your box will show the spinner graphic and the ui will be unresponsive while this happening.

v0.7
Updated release today of the script only. This update adds the following functionality to the script

If you are a plugin user on 0.6.3 with a single IPTV provider there is no need to upgrade to script version 0.7 (Plugin v0.7 is in the pipe line).

However as probably the largest out standing feature on our list I thought it worth releasing the script alone for those that don’t mind the command line.

FTP it to /etc/enigma2/e2m3u2bouquet on your enigma2 box.

SSH into your enigma box, then;


Code:
The script on first run will create a config.xml in /etc/enigma2/e2m3u2bouquet and tell you to fill it in.

Edit the config.xml and populate provider details and settings for as many providers as your require, the XML is commented so should be pretty straight forward.

NB: You need to change the supplier name field for the script to know you have updated the file.

Or use FTP to transfer the file for editing and replace it.

Then run the script again.


Code:
This will create bouquets for all the providers specificed and enabled in the config file.

Automation
To automate this use cron.


Code:
and press ESC follwed by :wq to exit the cron editor and save the entry. This will update your bouquets at 5am daily. 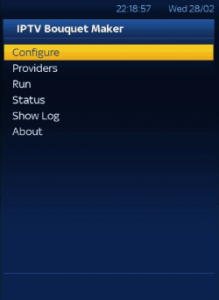 Start the plugin and then select configure to set general options 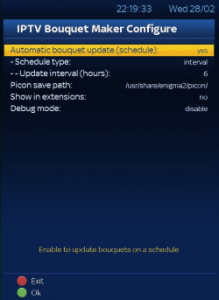 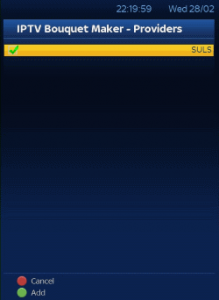 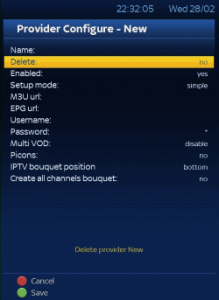 Enter at least the name and press green to save. For entering long urls instead of using the remote control it is recommended to edit the config file (see below)

The config file is located in /etc/enigma2/e2m3u2bouquet/config.xml and an example is below. You should be able to edit this file from your ftp client (or download, edit, upload back to box)


Code:
Provider url, port, name updates
With the introduction of the config file based setup there is now no need for us the maintain a database of provider details. It’s now up to provider to manage updates themselves. The provider can do this by setting the <providerupdate> element to the url of a text file. The text file should contain ‘Name,M3UURL,EPGURL’ e.g.

Code:
The USERNAME & PASSWORD placeholders will be replaced with the values from the <username> & <password> elements in the config file

V 0.7.6
We’ve had some reports of issues with epgimport .

Initial investigation suggest that a recent epgimport update will stop it from working with any panel’s epg feed.

We’ll investigate further but in the meantime we suggest not updating to the latest epgimport version.

This issue is caused by the latest version of epgimport checking for a ‘LastUpdate.log’ file on the server that supplies the xmltv epg feed. If the file doesn’t exist or the date within is older than 2 days then the server is considered invalid and not used. Unfortunately this file is used by Rytec feed servers but not IPTV panels.

New versions of epgimport have broken the epg for IPTV panels. You should avoid updating epgimport for now, or revert to a previous version.

Updating to v0.7.6 of this script/plugin should fix the issue on OpenPli and hopefully future OE-Alliance images.

-Fix issue where new providers couldn't be added
-When providers bouquet is downloaded (-b or -bd option) now uses full
service references
instead of just the epg relevant part in case it's used for picon naming
-Better multi provider handler e.g. if there is an issue with one provider it
won't stop the script processing others
-If vod categories are out of order in the playlist group together
-Fix file naming issues with non alphanumeric characters
-Much faster when using an override file
-Don't retry failed picon downloads
-Option to add placeholder channel in override file (to control channel numbering)
-Allow channels to be moved between categories, use categoryOverride in the override file
-All custom categories, use customCategory="true" in the override file
-Add provider managed update support

You can also download a generator that will let you enter your details and generate a one line install command with the plugin preconfigured. Right click on the following link select ‘save link as’ and then save to your PC – generator download. You can then run the generator by opening the downloaded file.

Open your plugins menu, there should now be a plugin named ‘IPTV Bouquet Maker (IPTV for Enigma2 – E2m3u2bouquet plugin)’