"It'll be sooner rather than later," Ozzy Osbourne says. "I don't know if we'll be writing in England or Los Angeles, but I'll fly to the fucking moon for it if I have to!? 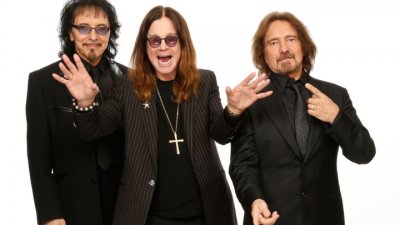 Following the global success of their most recent album 13, which debuted at Number One in the United States and several other countries, Black Sabbath have decided to record another album. Ozzy Osbourne told Metal Hammer that he hoped to begin the writing sessions with guitarist Tony Iommi and bassist Geezer Butler in early 2015. "We're going to do one more album, and a final tour," he said.

Osbourne reported that the experience of making and touring around 13 was positive all around and that the band left things off on friendly terms after their tour earlier this year. "Once the dust settled after the last tour we started discussing the idea ? because we were getting asked about it all the time ? I said to Sharon, 'What's going on? Because if there's no more Sabbath I want to get on with my own thing again,' and she came back and said 'Let me look into it,'" Osbourne told the magazine.

"Three weeks later, I asked her about it again, and she said 'Oh, I still have to talk to so and so...' And I said, 'Sharon, I ain't fucking 21 anymore. If we're going to do [it], I want to do it before I'm 70. Time isn't on our side.' So she made the call and came back and said, 'Yeah, the record company wants another album.' I believe Rick Rubin is going to do it with us again."

Pressed for a timeline, Osbourne estimated it would be "sooner rather than later." "Obviously a lot of it is coming down to Tony's health, he's obviously got his cancer treatment, but we'll get onto it next year," he said. "I don't know if we'll be writing in England or L.A., but I'll fly to the fucking moon for it if I have to."

In January, Osbourne told Rolling Stone that he was "down" to do another Sabbath LP, saying, "it's now or never." Iommi rejoined, "Absolutely." At the time, the guitarist reported that he was "feeling OK" from his treatments for lymphoma, which was discovered early in the making of 13.

In the meantime, Osbourne is readying the release of solo CD and DVD releases both titled Memoirs of a Madman. The album collects many of the singer's biggest hits, while the two-disc DVD compiles his music videos and a bevy of previously unreleased live performances. Last week, Osbourne released video of his bandmates from various points in his solo career, including guitarists Zakk Wylde and Gus G, sharing stories about how he impacted their lives.