Techie's Lounge Bridgestone shows off tires you never have to inflate

Bringing new meaning to the term flat tire, the Japanese company shows a second-generation prototype of its airless tires at the Paris Motor Show. 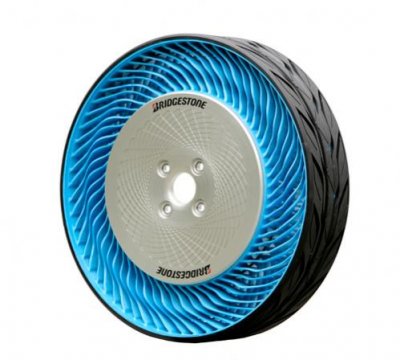 PARIS -- Maybe it's time to move beyond those donut-shaped balloons that connect our cars to the road.

At the Paris Motor Show here, Bridgestone showed off a second-generation prototype of its Air Free tire, which replaces conventional tires' cushion of air with an array of

-absorbing resin bands that resemble thick, angled spokes. The outside of the airless tire is coated with a replaceable tread made of a thin band of solid rubber.

Why mess with the proven design of tires? Of course, there's no such thing as a flat tire, but the main reason is to improve recyclability compared to conventional tires, said Olivier Monbet, leader of Bridgestone's technical department for France and Benelux.

"Every part of this tire is recyclable," Monbet said.

Bridgestone is a global powerhouse in the tire industry, with eight tire-making plants around the world. So it's got some clout. But it's not the only one trying airless-tire technology.

The Britek Tire has its Energy Return Wheel for bicycles and military vehicles. The Michelin Tweel is suited for loaders, a type of construction vehicle. The Hankook i-Flex is designed for passenger cars.

Bridgestone debuted the airless tire in 2011, but it's now improved over that first prototype. Monbet said Bridgestone is now comfortable with how well it absorbs

s. That's because a new design is better able to handle heat buildup.

The next priority is to deal with lateral stiffness. Right now it's too stiff, which isn't good when the driver steers, he said.

That issue should be addressed with new prototypes due over the next two to four years. Bridgestone plans to begin testing them within a year on small Toyota single-passenger electric vehicles that run in Tokyo, he said.

When the rubber part of the tire wears out, a new one can be fitted by heating it up and slipping it on, Monbet said.

It's too soon to talk about cost. "The cost will decrease as we increase production," Monbet said.