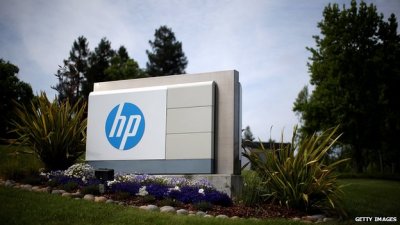 The US firm will separate its better-performing computer and printer business from its corporate hardware and services operations.

HP is in the midst of a restructuring plan and has announced tens of thousands of job cuts in recent years.

In August, it reported a sharp fall in profit despite a rise in revenue, helped by improved PC sales.

Chief executive Meg Whitman, who has the job of reviving the fortunes of the 75-year-old firm, acknowledged at the time that demand for PCs was "coming back", but that it was still "a declining business".

The Wall Street Journal first reported on the split plans on Sunday, saying HP had been looking to focus on its faster-growing businesses.

It says the move could be announced as early as Monday, and one of its sources said Ms Whitman would head the new spin-off, enterprise company.

She will also reportedly be chairman of HP's printing and PC business, which last quarter accounted for about half its revenue and profit.
Business pressures

HP has also been involved in a continuing legal dispute with Autonomy, a British company it bought for $11.1bn (?7bn) in 2011.

A year later, HP said the firm was worth $8.8bn less, accusing Autonomy of misleading them over the true value of the company.

The division of HP's businesses comes at a time when other large tech firms are being urged to break up.

Last week, online auction site eBay announced it was splitting off its payments system PayPal into a separate company.

HP has been under pressure from newer rivals such as Chinese firm Lenovo, which overtook HP as the world's largest PC maker in 2012. Third-ranked US rival Dell was taken private last year.

Founded by Bill Hewlett and Dave Packard in 1939, HP helped usher in the PC revolution and now has more than 300,000 employees globally.

Oh how droll. This was sent out as a confidential memo on Monday. On the BBC same day.