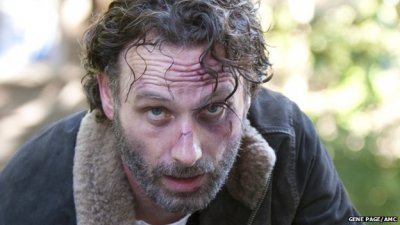 The fifth series opener of US drama The Walking Dead has been watched by 17.3m people, breaking cable viewing records.

It marks the biggest cable audience for a non-sports programme in the US, according to television viewing figures tracking company Nielsen.

The end of the series also set a new benchmark for a finale with 15.7m.

Sunday's return to the air also triumphed in the valuable 18-49 age range with 11 million viewers. Its nearest scripted rival was popular comedy The Big Bang Theory, which pulled in 6.9 million people in that key demographic.

The serial, which is shown on AMC in the US, is screened on Fox TV in the UK.

Variety reported that the show also reached record levels for the number of people obtaining the show illegally, with piracy tracking firm Excipio logging 1.27 million downloads in the first 24 hours after transmission.

But the level of piracy for TV series Game of Thrones pushes The Walking Dead into second place, with its fourth series premiere registering 1.86 million illicit downloads.

It added that Fox has rushed the show to some 125 markets around the world in a bid to thwart piracy.

The hit show tracks the fortunes of sheriff Rick Grimes - played by Andrew Lincoln - as he attempts to survive flesh-eating zombies.

It has also featured fellow British actor David Morrissey as The Governor, who wears a trademark eye-patch.

The latest episode "ripped up the TV rulebook", according to a review in The Guardian.

It was called a "humdinger of an opening episode", constituting a "mini-action movie".