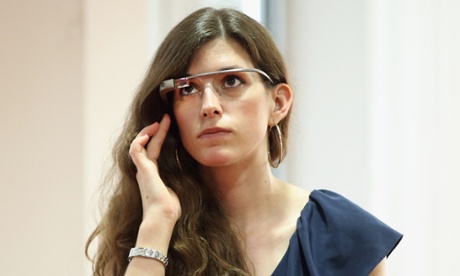 A Google Glass user. The device gives wearers access to the internet via its head-mounted display. Photograph: Sean Gallup/Getty Images


Scientists have treated a man they believe to be the first patient with internet addiction disorder brought on by overuse of Google Glass.

The man had been using the technology for around 18 hours a day ? removing it only to sleep and wash ? and complained of feeling irritable and argumentative without the device. In the two months since he bought the device, he had also begun experiencing his dreams as if viewed through the device?s small grey window.

The existence of internet addiction disorder linked to conventional devices such as phones and PCs is hotly debated among psychiatrists. It was not included as a clinical diagnosis in the 2013 update to the Diagnostic and Statistical Manual of Mental Disorders, the official reference guide to the field, and many researchers maintain that its effects are merely symptoms of other psychological problems.

But Dr Andrew Doan, head of addictions and resilience research at the US navy?s Substance Abuse and Recovery Programme (Sarp) and co-author of the paper on the patient, published in the journal Addictive Behaviours, says people are clearly suffering from problems related to internet addiction, and it is only a matter of time before the research and treatments catch up.

?People used to believe alcoholism wasn?t a problem ? they blamed the person or the people around them,? Doan said. ?It?s just going to take a while for us to realise that this is real.?

The patient ? a 31-year-old US navy serviceman ? had checked into the Sarp in September 2013 for alcoholism treatment. The facility requires patients to steer clear of addictive behaviours for 35 days ? no alcohol, drugs, or cigarettes ? but it also takes away all electronic devices.

Doctors noticed the patient repeatedly tapped his right temple with his index finger. He said the movement was an involuntary mimic of the motion regularly used to switch on the heads-up display on his Google Glass.

He said he was ?going through withdrawal from his Google Glass?, Doan explained, adding: ?He said the Google Glass withdrawal was greater than the alcohol withdrawal he was experiencing.?

He said the patient used Google Glass to improve his performance at work, where he was able to quicken his job of making inventories of convoy vehicles for the navy.

By the time the patient checked into the facility, he was suffering from involuntary movements, cravings, memory problems and dreaming as if he was wearing the glasses. When he was not wearing them he felt irritable and argumentative.

Some of this, says Doan, may be because a wearable device is constantly there ? so the neurological reward associated with using it is constantly accessible. ?There?s nothing inherently bad about Google Glass,? Doan said. ?It?s just that there is very little time between these rushes. So for an individual who?s looking to escape, for an individual who has underlying mental dysregulation, for people with a predisposition for addiction, technology provides a very convenient way to access these rushes.

?And the danger with wearable technology is that you?re allowed to be almost constantly in the closet, while appearing like you?re present in the moment.?

There is considerable disagreement among psychologists over whether the addictive use of technology is a disorder in its own right or simply a symptom of other problems.

?I think what you will find is it can be both ? it can be the primary problem that an individual develops that then leads to more problems, or the symptom of other problems like personality disorders,? said Daria Kuss, who researches internet addiction at Nottingham Trent University and published a comprehensive review of research into the issue earlier this year. Certainly, the US navy patient was suffering from underlying mental problems, including depression, social anxiety and obsessive compulsive disorder.

Kuss?s review concluded that reported cases of internet addiction were on the rise, but that more research was needed before clinicians could properly diagnose and treat patients suffering from it. Similarly, while internet addiction was omitted from the 2013 update to the Diagnostic and Statistical Manual of Mental Disorders, it was included in the appendix as a disorder requiring further study. To date, the only addiction not related to substance abuse included in the manual is gambling.

The outcome for the patient appears to have been good. After his 35 days at SARP, he said he felt less irritable, was making fewer compulsive movements to his temple, and his short-term memory had improved. He was released and referred to a 12-step programme for his alcohol abuse issues, and was hopeful about his recovery. Doan and his colleagues have yet to hear back from him.