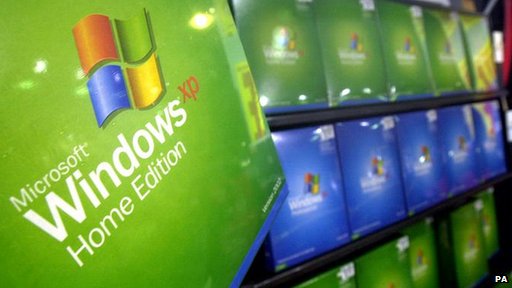 Microsoft has officially stopped selling retail copies of some versions of Windows 7 and 8.

The date to stop selling the software was set some time ago and should help Microsoft move people on to more recent versions of its operating system.

Separately, statistics suggest people are finally moving away from some very old versions of Windows.

The next version of Windows, called Windows 10, is due to be released in late 2015.

From 31 October, consumers can no longer buy copies of the Home Basic, Home Premium and Ultimate versions of Windows 7. Also no longer available is Windows 8. The change affects both copies bought in shops or loaded on PCs and laptops.

The current version of Windows, 8.1, will be the default version offered on PCs.

The change will take time to feed through into the market, as many PC makers have large stocks of older versions of Windows and will continue to sell PCs running the software.

Those keen to get a computer running Windows 7 will be able to "downgrade" from 8.1 to Windows 7 Professional but relatively few PC firms offer this option.
Gordon Kelly,
Please, Log in or Register to view URLs content!
, said the policy revealed "Microsoft's determination to distance itself from the original form of Windows 8" despite it being released just over two years ago.

The original version of Windows 8 did not prove popular because it did away with some familiar elements of the desktop version of the operating system.
By contrast, he said, Windows 7 has been available since late 2009 and is still very popular among users. About 53% of Windows users are on the various editions of Version 7 of Windows, he said. The more recently released Windows 8 has only grabbed a 6% market share and has already been surpassed by 8.1, said Mr Kelly.
The change will also clear the path for the arrival of Windows 10, he added.

Separately, market analysis reveals that the numbers of people using the venerable Windows XP operating system has suddenly seen a sharp decline. Data from Netmarketshare suggests that in October this year its share dropped from almost 24% to just over 17%. It is not yet clear what was behind the fall.