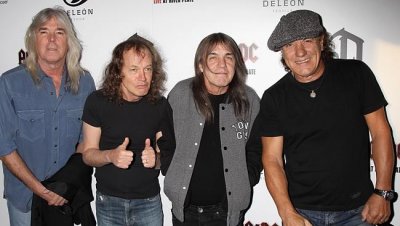 LEGENDARY Australian rockers AC/DC have confirmed Malcolm Young has officially retired from the band as they reveal their new record Rock Or Bust will be released on November 28.

The 15th studio record from the enduring band will be their first without Malcolm in their 40-year career.

AC/DC announced earlier this year that the founding rhythm guitarist was ?taking a break from the band due to ill health.?

While frontman Brian Johnston later revealed Malcolm had been hospitalised, the nature of his illness has remained undisclosed and the band have made a pact not to discuss it.

As AC/DC gear up to unleash their first new tunes in six years, they stated Malcolm would not be touring or recording with them in the future.

?Unfortunately due to the nature of Malcolm?s illness, he will not be rejoining the band,? they said in a statement issued by their label Alberts and Sony Music Australia.

The band confirmed they will embark on a world tour in honour of Rock Or Bust and their 40th anniversary, with Angus and Malcolm Young?s nephew Steve joining as guitarist.

He also played on the 11 tracks recorded in 10 days at the Warehouse Studio in Vancouver and produced by Brendan O?Brien.

Rock Or Bust is the follow-up to their hugely successful 2008 album Black Ice, which sold eight million copies worldwide and debuted at No. 1 in 31 countries.

When launching his debut solo album last month, drummer Phil Rudd dismissed rumours that AC/DC had considered calling it a day in the wake of Malcolm?s ill health.

?We were never going to retire. It?ll never happen. Angus will never retire and as long as Angus never retires I won?t f---ing retire either.?

Rudd said Angus took on the songwriting duties solo in his brother?s absence and next year?s tour details were yet to be finalised.

?I?ll get a call a month before they need me. We?ve done some long, hard tours. It?s not easy,? Rudd said.

?You do it for 18 months, you?re the walking dead when you finish, especially as you get older. But everything?s great in the band, we?re ready to fire up on all cylinders again.?